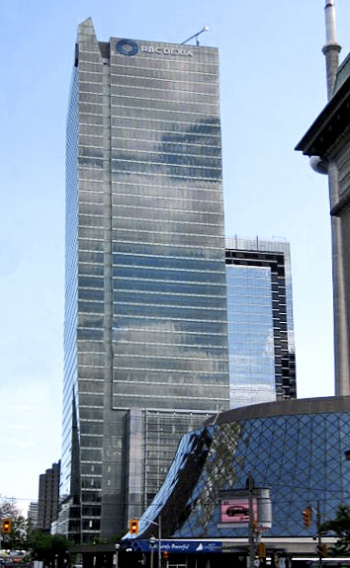 Green real estate refers to buildings that are helpful in saving on utilities, which makes your life more energy-efficient and eco-friendly, and which generally contributes to a greener lifestyle. Nowadays, there are many green solutions that can make a difference, including building materials, green supplies, household products, energy sources solutions, conservation, and substance reclamation. Green real estate is one of the top trends of current architecture, and various special awards are given to the projects of the highest excellence.

The National Association of Home Builders (NAHB), one of the most influential trade associations in the United States, honoured thirteen projects at the 13th Annual National Green Building Conference in Salt Lake City. Among them were five single-family home projects awarded for “pushing the envelope of what we can achieve with energy and resource efficiency.”

The Institute for Energy and Transport (IET) of the EU recognized several organizations with its Green Building Award 2011. Award criteria included innovation and energy efficiency.

Excellence in rebuilding projects all around the world was reflected by the Zerofootprint Re-Skinning Awards. Last year’s awards were also partnered by the John H. Daniels Faculty of Architecture, Landscape, and Design at the University of Toronto. The Zerofootprint Re-Skinning Awards 2011 found their winners in the categories of commercial, institutional, and residential solutions.

Holcim, a Swiss-based global supplier of cement and other building aggregates, contributed to the support of breakthrough ideas in sustainable constructions as well. The most innovative projects of 2011 were awarded the Holcim Awards in several categories according to their location.

The Canadian Green Building Awards (SAB Awards) are adjudicated based on the criteria of sustainable design, architectural excellence, and technical innovation. A jury recognizes the professional quality of both Canadian residential and non-residential buildings of all types. Selected projects of the 2011 SAB Awards included a community centre, an environmental education centre, a marine bay station, and a school. 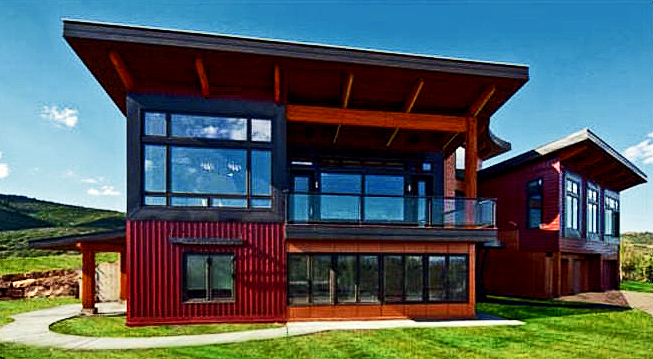 The net-zero energy home, Sungazing House by Tall Pines Construction, is the extraordinary home of the O’Meara family. The family of four decided to celebrate the beautiful nature of Park City, Utah. Their house is built in amongst impressive scenery, and its construction qualities make it a highly appraised project. The idea of an ultra energy-efficient house was initiated by the O’Meara family, who found out about the Passiv Haus movement and decided to invest in such smart solutions themselves. Designer Jean-Yves Lacroix embraced the concept of a home with a minimum need for energy through the design of an exclusive property with airtight construction, super-efficient insulation, and high-performance windows.

The Sungazing building is comprised of two rectangular structures connected by a three-storey tower from which one can enjoy the mountain view. In fact, every window and deck in the house is dominated by the splendid view of the natural scenery all around. The ultra-efficient home does not use electricity from the power grid. According to the builder, the house will manage well with just solar hot water panels and underground water storage tanks. No additional gas for space and water heating is required. The sides of the house are insulated with the special Trombe wall to absorb heat during the day and release it at night, making it an incredible tool to help with the heating budgets.

The home of the O’Meara family is located in the desert, so water conservation was one of the priorities for their house. Dual-flush toilets and low-flow faucets and shower heads helped to achieve this aim, along with the elaborate systems of drip irrigation. The home boasts three bedrooms and a master bedroom wing, four bathrooms, a media room, a kitchen and companion living room, and a playroom. The design flow of the whole space is spectacular. These qualities were some of the reasons why NAHB decided to give Sungazing House the Green Building Award 2011. 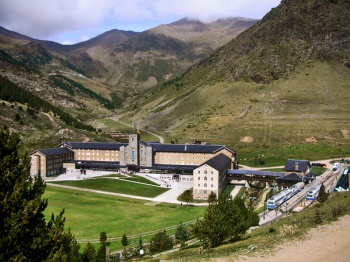 The Vall de Núria complex, located in the Easter Pyrenees (a mountainous region of Catalonia, Spain) includes five historical buildings of tremendous value designed by architect Josep Danés between 1923 and 1935. Surrounded by peaks of almost 3000 metres, Núria’s sanctuary belongs among the popular pilgrimage destinations. Ferrocarrils de la Generalitat de Catalunya, a local railway company, assumed the conservation and refurbishment works of the building, Sant Josep (St. Joseph), a couple of years ago. The work involved the restoration and insulation of its facade and its redesign. Similar procedures were taken for the roof apertures. The building was renovated according to the environmental policy and rules established by some of the EU certifications. Architects tried to achieve a maximum energy efficiency rating (type A) to ensure greater savings. The technical procedures included extra insulation materials, a ventilated double roof, and the use of geothermal energy for the heating systems. Special, cost-saving windows were produced to fit with the historical appearance of Sant Josep.

The building currently serves as a multifunctional destination with restaurant service and an exhibition area on the first two floors and hotel facilities in the upper floors. The green renovation of the historical building seemed for many to be too ambitious at the beginning. However, its well accomplished renovation (its energy consumption was reduced by 75.3 per cent) encourages similar projects to be undertaken in the future. Jurors of the Joint Research Centre, the European Commission’s in-house science arm, included the Vall de Núria Sant Josep building among the winners of the Green Building Award 2011. 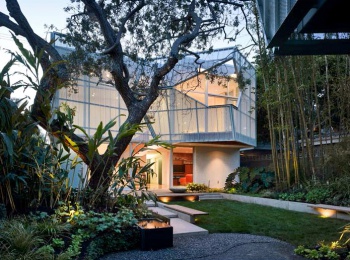 An example of deconstructivism applied to the existing house and guesthouse of a growing family, the Palms house is a stunning renovated residence located in Venice, California. The editor of specialized online magazine Design Milk, Jaime Derringer, described the charm of the building: "on more than one occasion, I’ve looked at this home and considered driving across the country and knocking on their door with a suitcase. Truly a beautiful home.”

The house is an example of harmony between raw industrial materials, modern aesthetics, and a sense of tranquility. The interior floor plan was designed carefully, and the interior spaces appear perfectly flowing and dynamic. An integral essence of the whole project can be described as a feeling of freedom. The authors of the projects, coming from various backgrounds, approached the renovation from a practical angle. Experiments with maximizing volume, light, and privacy were a success.

The project became the absolute winner of the Zerofootprint Re-Skinning Awards, which aim to pinpoint the best retrofitting projects from around the world. The Palms residence is a prime example of how to update older buildings and bring a smarter standard of living in terms of carbon, energy, and water performance solutions. Jurors of the Zerofootprint appreciated adding a livable space without increasing the site’s footprint, as well as sophisticated technologies sensitively used to minimize carbon emissions.

The characteristic feature of an exoskeleton armature of corrugated recycled steel panels gave the property a modern look, and serves as a very efficient tool that dampens sound, contributes to airflow, minimizes the need for cooling in the hot California summertime, and provides shading. The interior spaces of the home are integrated with its outdoor environment. Solar collectors, drought-resistant plants planted in the courtyard, and an intelligent irrigation system for water conservation during rainy seasons are some of other features that make this incredibly beautiful house one of the very best in today’s green real estate. 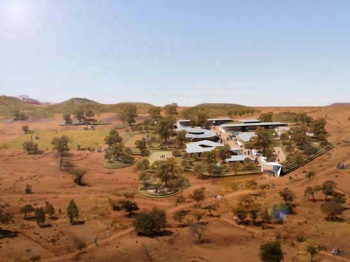 This ambitious project in one of the world’s poorest countries and winner of the Holcim Awards Gold 2011 undertook the energy-efficient reconstruction of school in Gando. This settlement of 3,000 lies in the southern area of Burkina Faso, approximately 200 kilometres from the capital, Ouagadougou. Education facilities in the region are of very poor conditions, resulting mainly from the challenging weather conditions of its hot and dry environment. The Gando project was designed to make the best of these weather conditions. The geniuses behind it used a natural ventilation cooling effect enhanced by routing air through underground tubes. Vegetation and double-skin roofs, along with the special façades, also contributed to the school’s increased energy efficiency. It now runs only on sun and wind energy. Intelligent irrigation technology was implemented as well, to collect scarce rainwater and irrigate newly-planted trees. What is more, a school library was built as a part of the project.

The Jury of the Holcim Awards for the region of Africa Middle East commended this project because of its universal approach, which does not perceive building as a mere construction but also emphasizes its social importance. Its urban design can contribute to village development and bring new opportunities to this forgotten corner of the world. The use of high-tech ideas implemented by low-tech means serves as an example for many other settlements in developing countries. Locally-sourced materials were the only materials for building reconstruction. The project generated a passion amongst local inhabitants. who learnt the basics of building skills, so that they can now take the opportunity of finding new employment in the area.

The great construction of a commercial high-rise bulding built according to new sustainability standards was achieved with the project of the 42-storey RBC Centre at Simcoe and Wellington Streets in downtown Toronto. Toronto Star critic Christopher Hume described the project as one of the two most beautiful buildings completed in Toronto since the beginning of the 21st Century. Owned by one of Canada’s oldest banking institutions, the building creates high-performance headquarters facilities for both anchor tenants, RBC Dexia and the RBC Financial Group, recognized leaders in the sustainable business practice. The Class AAA office tower occupies a prominent site, and the impressive scale of its glazed form gives it a distinctive profile on the Toronto skyline.

The tower designers tried to achieve an effective and healthy working environment that was energy-efficient at the same time. The building has incorporated flexible and super-intelligent ventilation controls. Perhaps the most important feature was the use of recycled and environmentally friendly construction materials, the proportion of which is over 40 per cent. Products were obtained from local sources unless it was not possible. Rainwater is being collected for re-use in the building’s irrigation and toilets. Finally, this building with its many top green ratings did not require high additional costs, and savings on the performance have already beaten the costs of its eco-friendly construction. The whole building is down to the smallest detail an inspiring example of how business towers should look and perform. The RBC Centre received the 2011 SAB Award.

One Response to “Top 5 Green Real Estate Projects of 2011”